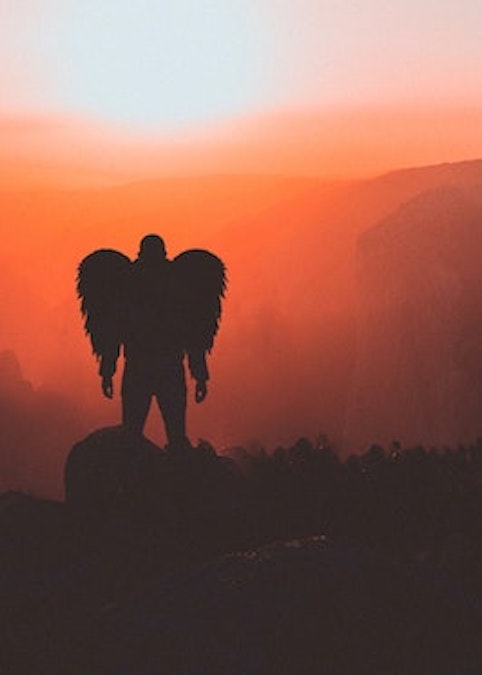 Being paraplegic doesn’t make me a weakling. Probably only professional weightlifters could’ve beaten me in an arm-wrestling match, for example. So it only took a few seconds for me to situate myself on a nearby bench, after I’d secured the knife.

I regarded him for some time as he struggled toward me. His breath hissed, gurgled, sounded something like the cappuccino machine I got last Christmas.

“Why are you doing this?” I finally asked. I pulled him up onto the bench next to me. I handed him back his knife.

He didn’t say anything. He just glared at me, his cloudy eyes looking every bit the, what? four millennia old that they were. I asked him a few more times in various ways, in various languages until finally I found one that he responded to: English, strangely enough.

“You’re the last. The last one who truly believes.” Then he stared off into space– well, really my living room’s cathedral ceiling– like that had answered everything.

For the first time, I noticed that many of the wrinkles were scars. Apparently he had been busy with his exacto knife prior to coming here– scars on his face and neck, his wrists too, of course.

I didn’t ask him anything else. I slid across the room back into my wheelchair and rolled into the kitchen. I made us both some tea.

When I returned he had vanished– no, there he was crouching next to the nearest electrical outlet. This time he was sticking his knife into it.

“Yet you still truly believe in me.”

I handed him his tea. I wasn’t expecting a thank you, but he did stop his suicide attempts long enough to sit on my sofa and drink the damned tea. He looked at me during each sip.

I gave in and spoke first: “–all right, I’ll play. What do you mean I’m the last one to believe?”

“When did I first become your God…?”, he blurted out too suddenly. Before I could answer, he added, “…I can’t remember.”

I thought about it for a while. It had been Dad. Dad was an atheist or agnostic or something and anyway, when my sister and I were younger whenever we sneezed he wouldn’t say ‘God bless you’ or ‘bless you’– instead he would say “Quetzalcoatl”. It was a joke, but it was always a reminder of just what high esteem Dad held reason in, above superstition and all religious sentimentality.

So later, when Dad died in the crash, I didn’t know who else to pray to. Who else would listen to me and bring back Dad? I chose the only God that Dad ever believed in, even if only as a joke.

“I don’t remember,” I lied. My phantom limb syndrome went away a few months after that crash, but the pain from not having my Dad never leaves.

I got tired of watching him breathe, so I went outside on the patio to water my azaleas. When I returned he had already formulated his next question.

I didn’t answer right away. I mopped the midsummer sweat from my forehead with a paper towel. Here in my living room was the deity that I had prayed to as a child. I offered to trade my life for dead father’s. Anything. Now my God invited death. I crushed the ingredients for another cup of tea while he spoke.

Quetzalcoatl in his windbreaker explained: “I am too weak to kill you. I could wait for you to die and then, no longer having any followers, I would finally perish. But in this weakened state I do believe I could die now– if someone stronger than me was doing it. Will you?” His shaking hand offered me the exacto knife. Handle first, blade politely retracted.

I handed him his second cup. Finally I avoided his question with my own steam of consciousness: “How can I be the only one left? In the whole world? I don’t see how–?”

At that the old man closed his eyes and turned his head like he was hurt by a dog whistle. He was trying to remember: “I…grew weary. Every blade of grass, every breath of air. I had made it all. I was the ultimate artisan, my design existed only for me to execute.

“But at some point, there was no joy, no artistry. People believe in free will. You believe in it. There is none. Everything transpires exactly as I have always intended.

“And so, as I had to, I longed to end my life. Yet I was immortal. A god lives as long as there is one believer.

“At first, I had my own subjects sacrifice themselves. Then I led my people to wholesale slaughter and ruin. Plagues. Wars. All of my energies devoted to destroying my own flock.

“In the beginning that only strengthened me. As people die, those who remain turn more feverishly to their faith. But by the time of the Conquistadoros and Manifest Destiny, my people’s numbers had sufficiently dwindled such that my own powers began to weaken. No longer all seeing, all knowing. Powerful, yes. But a demigod only.”

He sipped his fresh tea. His smile returned and he once again focused his eyes on me.

He continued: “These were the happiest times. I sailed the universe, returning only to offer my people visions of hope and salvation…helping their journeys to rejoin me as one with the Earth spirit when they died.

“But I had been too effective. My people never recovered their vitality. They continued to dwindle. And as my people saw generation after generation of regress and forgot the lessons of their forefathers, they lost their faith. As they did, I became weaker. Soon I was bound to this mortal plane. Finally even forced to take human form. For nearly two-hundred years, I have wandered the Earth as the weak, sick old man you see now. For the last decade I have spent my days soiling myself and counting the number of times I pee.

In my old age I have rejoined the wisdom of my youth. You are the last. So I will, in fact, pass away…once one of us is dead. So I say again: Will you not kill me?”

Of course, he had no way of knowing that I already had. I had clearly mashed half a bottle of pain killers into the second cup on tea. What kind of a God doesn’t notice a thing like that? I mean, wouldn’t it taste different?

The mighty one roused from his slumber. He stretched his form (this time imagining it to be that of a long feathered snake instead of the bearded Caucasian, thus it was so). In an instant, the mighty one– Quetzalcoatl, perhaps– saw through the eyes of everyone, felt the currents of the waves and the wind, heard the cosmic rays sing as they ricocheted through the planet, and danced the dance of the plants of the earth. Deep in its bosom, the Earth spirit could still feel the molten rock spinning its disagreement within its own magnetic fields.

Once again the dream of death, reflected the Creator. Even God can have a bad night.